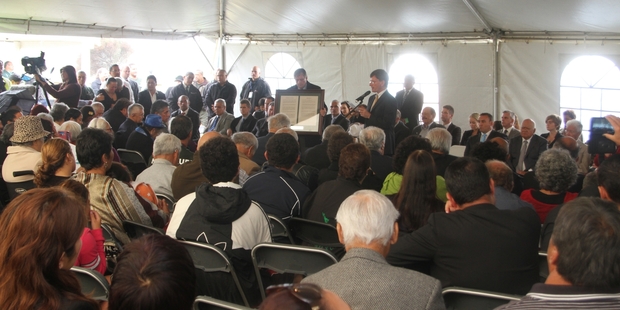 The Crown apology to Ngati Kuri, delivered by Minister for Treaty of Waitangi Negotiations Chris Finlayson at Ngataki on Friday, acknowledged that it had failed to uphold the promises made in the Treaty of Waitangi to actively protect Maori interests, and to confirm and guarantee tino rangatiratanga, in its relationship with the iwi.

In particular, it had not always recognised Ngati Kuri as an iwi, and its failure to respect the rangatiratanga of Ngati Kuri had been an ongoing grievance.

The Crown had failed to conduct an adequate investigation of customary interests, and did not include Ngati Kuri when it purchased the 86,885-acre Muriwhenua South block in 1858; Muriwhenua South was more than a third of the Ngati Kuri rohe, encompassing an entire east-to-west section of the peninsula, but the Crown only reserved 100 acres for future Maori use and took no measures to protect that reserve from alienation.

The Crown’s egregious failure, through these acts and omissions, to protect Ngati Kuri interests was a breach of te Tiriti o Waitangi and its principles.

The Crown acknowledged that Ngati Kuri received few direct or indirect benefits from the Crown acquiring that land in advance of settler demand with little permanent settlement or development of infrastructure, such as roading, to link the remainder of the Ngati Kuri rohe to developing markets and settlements in the following decades.

From 1865 the Crown imposed a new land tenure system, without consulting Ngati Kuri, giving rights to individuals and allowing for the conversion of aboriginal title to freehold title. Ngati Kuri had not consented to the diminution of the laws of their ancestors, but had had little option but to operate within the Crown’s new land laws.

By 1875 the Native Land Court had vested four land blocks, totalling 78,000 acres, in 10 or fewer owners, and within a few years most of that land was in private ownership. The Crown acknowledged that its individualisation of land title was inconsistent with Ngati Kuri tikanga, made land more susceptible to partition and alienation, and led to the fragmentation of land ownership, contributing to the erosion of the traditional tribal structures, mana and rangatiratanga of Ngati Kuri.

The Crown acknowledged that its assertion of ownership of Motu o Pao (Cape Maria van Diemen) in 1875, as being surplus Crown lands, was premised on the island being part of the 1840 Muriwhenua transaction. In 1871 the Crown abandoned any claim to ownership of the majority of lands within that transaction area, and in those circumstances the Crown’s assertion of ownership of Motu o Pao was particularly unjust and unreasonable, effectively a compulsory acquisition by the Crown without compensation, and a breach of te Tiriti o Waitangi and its principles.

The Crown recognised Motu o Pao is an ancient burial place and wahi tapu for Ngati Kuri. Its desecration of Motu o Pao through the building of a lighthouse in 1877 was a source of significant grievance, which drew repeated protest from Ngati Kuri leaders.

The Crown acknowledged that Crown and private purchasing had alienated Ngati Kuri from more than 70 per cent of the tribe’s ancestral land by 1880, disturbed Ngati Kuri’s traditional resource use and settlement patterns, and severely limited economic opportunities, leaving whanau dependent on a precarious cash economy based around gum digging.

In 1896, on the application of a single individual, ownership of almost all the remaining customary land in the iwi’s rohe (the approximately 60,000-acre Parengarenga and Pakohu blocks) was awarded by the Native Land Court to more than 500 individuals. The crippling cost of surveying the land for the court’s process left those owners with substantial survey debts, and at risk of losing the land.

The Crown’s intervention in 1904 to stop the owners permanently losing the land resulted in the Crown-appointed Maori Land Board having complete authority over almost all Ngati Kuri’s remaining lands, while the land was leased to private parties to pay the survey debt.

The Crown acknowledged that the survey debt was repaid by 1910, and its subsequent failure to return control of the land to the owners for more than three decades, despite repeated appeals from the owners, was a breach of the treaty.

Under the administration of the Land Board, Ngati Kuri were largely reduced to living on three small reserves totalling less than 2000 acres. Neither absentee nor resident owners received any on-payment of the rent the Land Board accumulated from leasing their other lands. When the Crown approved the board using the accumulated funds to assist development of Te Kao lands, with the intention of assisting Te Hapua later, this disparity of approach was a source of grievance for Ngati Kuri, and gave rise to tension with their whanaunga.

Ngati Kuri had little access to adequate health care over a prolonged period, when nearly a quarter of children at Te Hapua died before they reached the age of five and the community suffered malnutrition and diseases such as typhoid and tuberculosis.

Living conditions at Te Hapua were the subject of national concern, and repeated Crown inquiries in the 1920s and 1930s with Ngati Kuri leaders appealing to the Crown to either purchase adjoining private land sufficient to sustain them or provide the development assistance to enable the development of the adjoining lands that remained under Land Board control.

The Crown acknowledged that it concluded the lands were unsuitable for development, and pursued a policy of encouraging Ngati Kuri to leave Te Hapua.

The displacement of Ngati Kuri people impeded inter-generational transfer of matauranga, and contributed to a decline in the use of te reo. Alienation from the land also impeded the ability of Ngati Kuri to exercise their cultural responsibility to provide manaakitanga and exercise kaitiakitanga.

The Crown acknowledged that the people of Ngati Kuri remained resilient in the face of these prejudicial circumstances, and continued to work together to develop their land and economy to retain the iwi at Te Hapua.

The Crown acknowledged that when it finally provided development assistance for the Parengarenga lands in the 1950s Ngati Kuri were once again deprived of control of their land for decades, while it was under development, and the Maori Trustee actively pursued the purchase of individual shares from owners, as a result of which it retained a significant shareholding in the Parengarenga Incorporation.

The Crown acknowledged that it promoted legislation to empower the Maori Trustee to compulsorily acquire shareholdings it considered to be uneconomic from Maori owners, in breach of te Tiriti o Waitangi, which deprived some Ngati Kuri of their last connection to their turangawaewae. Ngati Kuri still feel the legacy of 19th and 20th century land laws, which resulted in many Ngati Kuri being excluded from connection to their tribal lands.

The Crown acknowledged that in the 1960s it wished to establish the Spirits Bay public campground, and pressured Ngati Kuri to leave the Kapo Wairua papakainga they had occupied for generations by fencing off their living areas, causing great spiritual and emotional pain.

The Crown acknowledged the harmful effects of a state education system that for too long did not value Maori cultural understandings, discouraged the use of te reo, and generally held low expectations for Maori academic achievement.

It also acknowledged that despite the Crown’s failures to honour its treaty obligations, Ngati Kuri had shown exemplary loyalty as citizens of New Zealand, including making the ultimate sacrifice in defence of New Zealand in overseas wars.

“The Crown unreservedly apologises for its failure to appropriately recognise and respect the mana and rangatiratanga of Ngati Kuri. This was unprincipled, and has left Ngati Kuri almost invisible as an iwi in the history of Te Hiku o Te Ika,” Mr Finlayson said.

“The Crown profoundly regrets its breaches of te Tiriti o Waitangi and its principles, which have had an enduring impact on Ngati Kuri. The Crown is deeply sorry that it has not acted with the utmost good faith towards Ngati Kuri in a manner consistent with the honour of the Crown.

“These omissions restricted Ngati Kuri’s ability to act as kaitiaki over their taonga, wahi tapu and whenua, and the compounding effects of successive flawed land laws progressively undermined your traditional tikanga and rangatiratanga.

“The Crown regrets the prejudice Ngati Kuri have suffered as a result, including being marginalised on your ancestral lands and a loss of tribal authority, social cohesion, traditional knowledge and ability to develop economically.

“The Crown unreservedly apologises for the cumulative effects of its on-going actions and omissions, which contributed to Ngati Kuri suffering significant population losses and left the people in poverty, poor housing, and deep distress over successive generations.

“With this settlement the Crown seeks to atone for these acknowledged injustices and begin the process of reconciliation. The Crown intends, in the utmost good faith, from this point forward to begin a renewed and enduring relationship with Ngati Kuri based on mutual trust, commitment, co-operation and respect for Te Tiriti o Waitangi and its principles. This is done in the spirit of establishing a new and invigorated relationship based on mutual dignity and respect.”