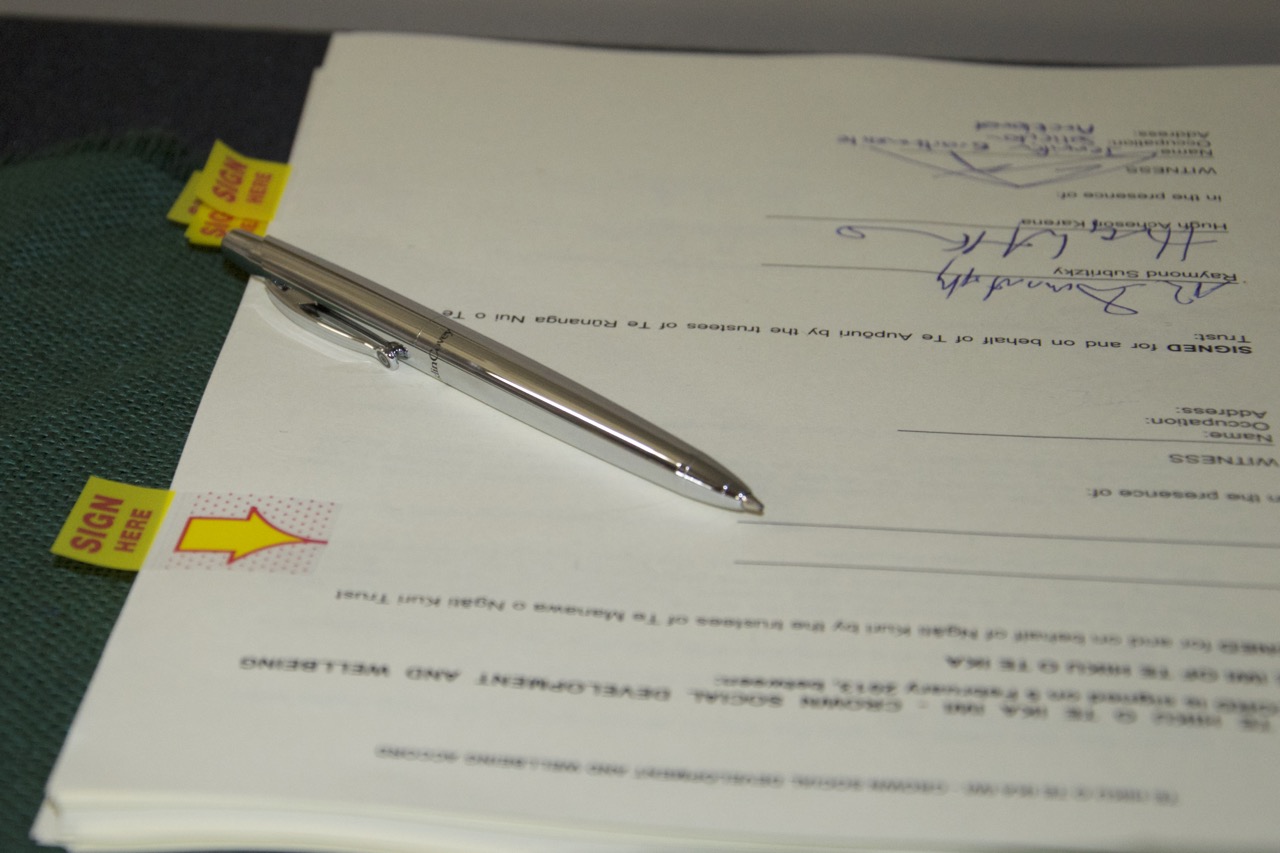 Friday’s signing of a deed of settlement between Ngati Kuri and the Crown at Ngataki’s Waiora Marae represented an important step towards settling all historical grievances in the Far North, and New Zealand as a whole, according to Minister for Treaty of Waitangi Negotiations Chris Finlayson.

It also signified a new relationship between Ngati Kuri and the Crown.

Ngati Kuri’s claims were based on Crown actions and omissions that left the iwi with few economic opportunities. Many had to leave the rohe altogether, resulting in a loss of social cohesion and difficulty in passing on Ngati Kuri’s tikanga, traditional knowledge and language to younger generations.

“Signing the deed [at Ngataki, foul weather having scuppered the original plan to stage the ceremony at Te Rerenga Wairua] recognises Ngati Kuri’s role as kaitiaki over this area,” Mr Finlayson said.

“This settlement will enable the people of Ngati Kuri to focus on developing a strong cultural and economic base for the future.”

The settlement included financial and commercial redress of $21 million, along with cultural redress, recognising the iwi’s traditional, historical, cultural and spiritual associations with several key sites. The iwi would also receive a cultural endowment fund of $2.23 million for the enhancement of its historical and cultural identity.

The settlement will be given effect through the Te Hiku Claims Settlement Bill (Omnibus), which will give effect to the signed deeds of settlement with Te Aupouri, Ngai Takoto, Te Rarawa and Ngati Kuri, including their collective redress, which includes a co-governance arrangement with the Northland Regional and Far North District councils over Te Oneroa-a-Tohe/90 Mile Beach.

Te Hiku iwi will also be involved in decisions for the protection and development of public conservation lands remaining in Crown ownership through the Korowai for Enhanced Conservation. The collective redress provides scope for Ngati Kahu, the remaining unsettled iwi of the Far North, to participate in advance of reaching a comprehensive settlement.

Also included is an Accord that sets out how the Crown and iwi will work together to transform the social development and well-being of Te Hiku whanau, hapu, iwi and wider community.

The Crown and iwi negotiators initialled the deed in October last year. It was subsequently ratified by Ngati Kuri’s membership, 87 per cent voting in favour.

It was the first deed of settlement signed this year, the 68th in all and the 42nd since 2009.