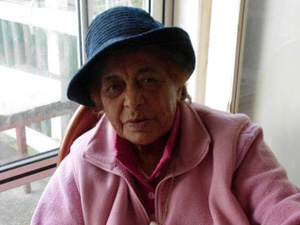 Saana Murray, who spent most of her 85 years fighting for Maori guardianship of land, culture and taonga, has died.

The Ngati Kuri kuia and mother of 13 was the last of the original claimants for the Wai 262 “flora and fauna” claim to the Waitangi Tribunal. She died peacefully on Saturday night, surrounded by her friends and whanau.

Son-in-law Ted Watts said Murray had been very sick and had spent the last week of her life in hospital. “It was beautiful. The only way to go, especially if you have a big family like ours. Songs and waiata were going all night non-stop and she was at peace.”

Murray, was born in Te Hapua in Northland and was the eldest of 14 children.

She wrote powerful poetry in English and Maori and was working on her second book when she died.

Her body will be taken today to Te Reo Mihi Marae in Te Hapua and she will be laid to rest at the urupa at Spirits Bay on Wednesday.

The Wai 262 claim was lodged 20 years ago by members of Ngati Kuri, Te Rarawa, Ngati Koata, Ngati Porou, Ngati Wai and Ngati Kahungunu. After the landmark ruling in July, Murray spoke to the Dominion Post about her sadness at realising she was the only Wai 262 claimant still alive.

Murray had also expressed her dissatisfaction with the findings of the Wai 262 report, and said it was important to preserve the land for future generations of any race and not succumb to business interests unless they were beneficial to all.

Maori Party co-leader Tariana Turia acknowledged the contribution Murray had made to Maori throughout her life and praised her leadership and vision.

“Saana lived her life in a way which left no-one in any doubt about her pride in her people of Te Hiku o te Ika and in particular Ngati Kuri.”